What are the most common dance steps?

Dance disciplines share a few things in common. Music, movement and those steps. Many dance steps come up again and again because they serve a useful purpose in a routine. At First Dance Studios we love to add these steps to numbers. We’ve listed a few of our faves below. Which ones do you love dancing?

This step recurs again and again as it is a great step that ends with a foot change but also looks rather elegant whilst doing it. So called because it actually translates as beating steps. But rather is actually more a “behind side front” sort of step. It is usually a connecting step or preparatory step for another sequence of dance steps. Used in ballet, jazz, tap, contemporary dance, this step is a firm favourite of all our amazing dance teachers. There is a very satisfactory swing feeling to this step.

Ah the famous ball change. This step is essential in dance as it will get you to swap feet over quickly and easily. It is found in pretty much all the of the dance disciplines from jazz, tap, street, lyrical, ballet. Called this, because by using the ball of the foot weight is transferred to change feet. The step is two counts where the weight goes to the ball of the foot and then a step back on the other foot usually at the back. As a child when I first heard it I thought the dance teacher had said “bull change.” This still makes me laugh now.

Does what it says. You step out a box shape. There are actually two ways to box step. One is a dance step used everywhere especially with line dancing and comes in very handy for weddings as well. All you have to do is step forward, bring the other foot with you to join it. Then another step to the side and the foot to join it and repeat until you complete the square. So almost as if you are walking out the lines of the square.

You spin me right round, baby. There are lots of turns but the most basic turn is the step turn step. Simples. Take a step with one foot to the side, turn and then step out with the other and stop. I quite like the stop because you can leave the foot available for the next step. It always looks very sultry there, hanging out with come hither heels. But come a turn, come the arms. Using arms will help propel you to turn. When turns repeat like a Chaînés turn, (which you can learn more about in classes such as Technical ballet) then spotting is needed. More on that later. Other turns include spins, pirouettes, barrel rolls, axels, attitudes and a whole lot more. 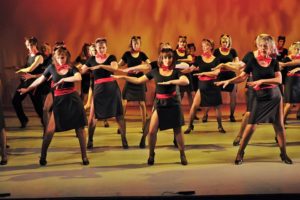 Get your dance steps here!

My most vivid grapevine memory is from going to a keep fit class in Brighton at the King Alfred Centre. The gym instructor in full yet hardly there Lycra with a Madonna head mic.  To do one, face the front, you take your right foot out to the side and step left behind the left foot. Then right step to the right and left tap (this is simply bringing the ball of the foot to the right tap). Then repeat but on the other side. So left step to the left, right foot behind the left foot and then left step to the left. Right tap. Claps can be added and an extra jump. That might just be me though! Grapevines appear very often in warm ups and routines so it is a really good idea to master it.

This one is a great one to do in couples. Used a lot in line or square dancing but actually many routines and dance disciplines have them in. All you need to do is face your partner. Then walk around each other but without turning, remaining facing your front the whole time. The idea is that they are doing the same thing so never the two shall meet. So it is not a turn as above, but more of a box step around each other. Like the box step it requires the step of faith which is to step backwards. In one of our tap routines for the show, there are plenty of these.

And finally we have the perfection of the pivot step. Nail this step and you will have it. I actually mean that. This is a step where it helps to think that you have a foot nailed to the floor. It is a favourite on the dance floor and works very well for small spaces. It could be taken for a turn but as you leave one foot in place it is really a pivot. One foot steps in front of the other, and then the body pivots around back into the original position. With the foot firmly nailed into place, it makes much more sense.

Come along and see which of these steps you enjoy most. We have classes daily both in studio and online so please see the timetable here.

First Dance, For All.